Pride House Tokyo aims to raise awareness of LGBTQ issues through the creation of hospitality spaces, hosting of events, and production of diverse content, while taking advantage of the opportunities available during the Tokyo 2020 Summer Olympics and Paralympics and working across corporate, individual activists and organizational sectors.

Pride House Tokyo Legacy brings together 35 NPOs and activists, 15 corporations, and 20 embassies in Tokyo, many athletes and sports professionals, to create a safe and secure place to broadcast information on and by the LGBTQ community. The center will be designed as multipurpose space capable of hosting a variety of online and offline events. It will also include space for individual consultations and a library to house Japan’s first “LGBTQ Community Archives”.

Initially Pride House Tokyo Legacy was due to open from 2021, the year following the Tokyo 2020 Summer Olympic and Paralympic Games. However, we changed our plans based upon the results of our survey “LGBTQ Youth TODAY” which was conducted early on in the coronavirus pandemic and identified the need for a safe way for people to come together regardless of sexual orientation or gender identity. This need is particularly relevant as we look to live with the pandemic in the mid to long term.

“Pride House Tokyo Legacy” operates from our opening on October 11 (Sunday) to December 31 (Thursday) as part of the ‘Official Programme’ of the Tokyo 2020 Organising Committee, disseminating information on LGBTQ and sports, education and culture in line with the latest coronavirus counter-measure will host a variety of online and offline events. 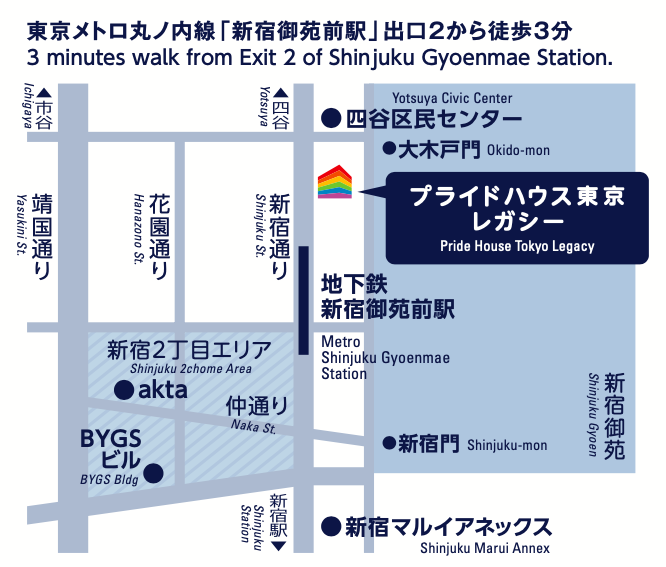 ◆「Pride House Tokyo」consortium（※Japanese alphabetic order , as of May 29）

Special support from the Embassy of the Netherlands in Japan.